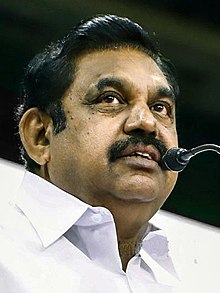 Edappadi K. Palaniswami (born 12 May, 1954) is an Indian politician and the Current Chief Minister of Tamil Nadu, having assumed the office on 16 February 2017. [K Palaniswami was sworn in as Chief Minister of Tamil Nadu on 16 February 2017. He was elected as the leader of AIADMK Legislature Party on February 14, 2017 after incumbent V. K. Sasikala was convicted by the Supreme Court of India in the 20-year old disproportionate assets case.]

Personal life
Edappadi K. Palanisamy was born on 12 May 1954 in a village called Siluvampalayam, Samalapuram near Salem district. His father's name is Mr.Karuppa Gounder and Mother name is Thavasi Ammal. His father was a marginal farmer. Palaniswami is married and living with his family in Chennai. His wife name is P. Radha whose profession has also been declared as an agriculturalist in the election nomination paper. He has a son whose name is Mithun.He is an General manager in Sriram IT park.

Legislative career
Palanniswami has won the assembly election to the state assembly four times, in 1989, 1991, 2011 and 2016 from the Edapadi constituency. Lost the elections parliamentary in 2004,2009.